St Joseph’s B.N.S. is striving to achieve a physically educated and physically active school community. With help from our teachers, students, parents and wider community we hope that in 2020 our school will be recognised as an official ‘Active School’. As always, when the school community puts our minds to something we can achieve big things. We set up our Active School Committee every September with members from every class.
A key part of the ASF process is finding ways to encourage less active children to ENJOY physical activity more. Therefore, it is essential that the voice of less active children is represented alongside the voice of more active children on the ASF Committee.
We organised a poster and slogan competition for the whole school. Each child from 1st to 6th class designed an active poster with an active slogan somewhere on their poster. A winner was picked from each class and an overall winner was chosen from the whole school. The overall winner was Aaron from 6th class. Our new Active School slogan is ‘Climb, Jump, Swim, Run…..Make your fitness number one!’. Everyone had great fun doing the competition. Here are some photos of the winners and the overall winner accepting his prize.

Well done to our athletes from 5th and 6th class who competed with thirty other schools from as far afield as Mayo and Clare at the magnificent National Indoor Arena in Abbotstown yesterday. Every class in the school is now doing regular running as part of our Active School initiative. There will be more cross country events in the next few weeks so hopefully everybody is getting up to peak fitness!
Photos Click here for video clips.

We were delighted and honoured to have Holocaust surivor Tomi Reichental visit the school today to speak to boys from Rang a 5. When Tomi was a young boy in Slovakia, his family were rounded up by the Nazis and taken to Bergen-Belsen concentration camp. It is estimated that over 50,000 people(including Anne Frank) died in this camp.

Last week was Internet Safety Week. The boys have been using the Be Internet Legends Scheme to look at how we can stay safe when using the Internet. This teaches children to show proper respectful behaviour when online and how we can block and report people who are being abusive online. We also learned about how we should keep our personal information secure and how we can make a secure passwords. We also learned about appropriate sharing of information. Our senior classes used Mentimeter.com to record our thoughts about internet safety – see an example of this are below. Parents may also consult webwise.ie for more on this topic.

Congratulations to the boys from Rang a 6 who received the sacrament of Confirmation from Bishop Eamonn Walsh yesterday. A special word of thanks to the choir led by Ms Molloy and Ms Byrne.

During Catholic Schools’ week (26th Jan – 2nd Feb) we learned and talked about Living in Harmony with God, our Neighbours, all Generations, the Earth and in our Catholic school.
At our prayer service on Wednesday, we reflected on how being kind, being a good friend, caring for our families, and caring for the environment are all ways to help us live in harmony with each other. Thursday was a very exciting day as we welcomed our Grandparents to the school. Lots of fun was had by all. 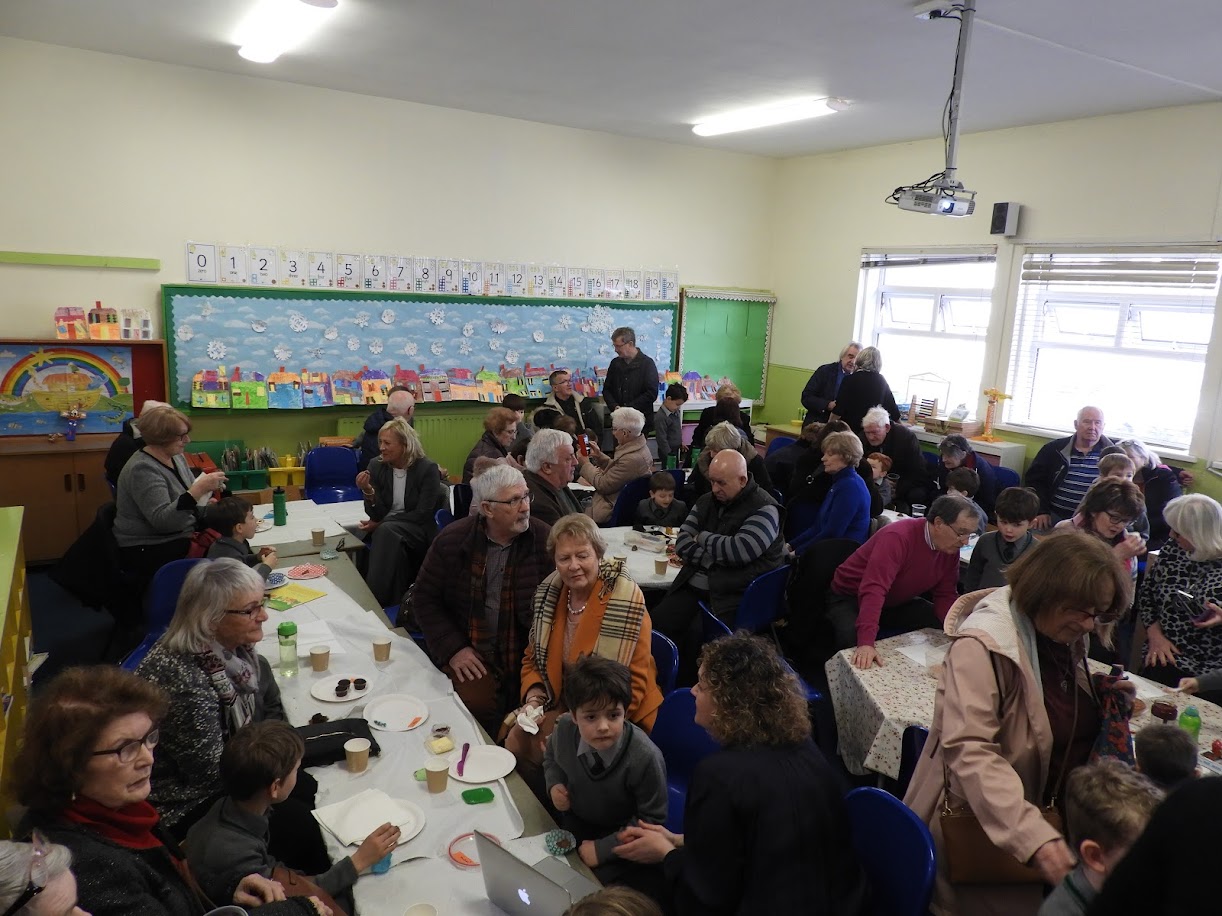 We went on a class trip to the Pearse Museum. We read a class novel about a boy called John Joe who went to St Enda’s School (which is now called The Pearse Museum in memory of Patrick and William Pearse. Our tour guide, Marian led us around the building. She was a great tour guide. It was really fascinating looking at all of the history in the building. We saw Patrick Pearse’s office, the dormitory in which John Joe slept in in our class novel, the main entrance hall, the auditorium-where some of our classmates got to play the piano, the dining room and the art gallery. After all of that, we went down into the basement and saw many historic items belonging to the Pearses. We also watched a short film with no audio about O’Donovan Rossa’s funeral, where you could see the only remaining video footage of Patrick Pearse (who was giving a speech). Shortly after we made our way out of the building and went to the garden, where you see one of Patrick Pearse’s poems, The Wayfarer, etched into the pavement surrounding a fountain. The Wayfarer is thought to be his last ever poem, written before he was executed by the British. You can see in the poem that he knew he would be executed shortly. The class thought that it was a great trip, and everybody enjoyed it.
PJ and Ryan 5th Class, Ms Molloy.