merged triumphant after another football final win in Croke Park. The senior football team, managed by Mr. Brennan and Mr. Ring played with great skill and tenacity to defeat St. Mary and Joseph Primary School, Sutton by 2-10 to 0-12. St. Joseph’s got off to a great start but gradually their opposition showed that they were worthy opponents and by half time St. Joseph’s lead by just 2 points.

In the second half St. Mary and Joseph’s picked off some good points to take the lead but St. Joseph’s came back with a goal and several well taken points to win by 2-10 to 0-11. Congratulations to the boys, their managers and their parents.

thanks to Mr. O´Flynn, Mark Caslin, Ben and Geordan 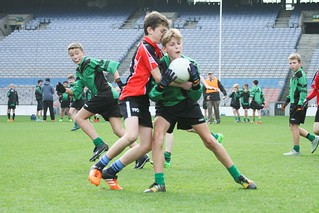